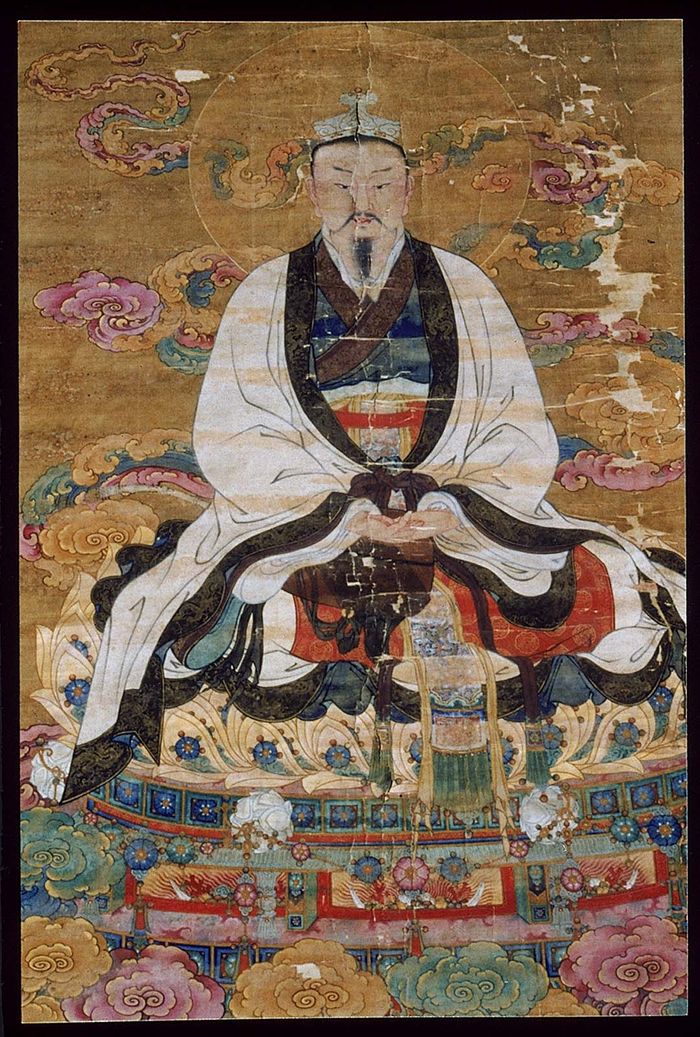 The birds awakened, the flowers opened their eyes to the rising sun, and Ming-Y found himself at last compelled to bid his lovely enchantress farewell. Sie, accompanying him to the terrace, kissed him fondly and said, “Dear boy, come hither as often as you are able—as often as your heart whispers you to come. I know you are not of those without faith and truth, who betray secrets; yet, being so young, you might also be sometimes thoughtless; and I pray you never to forget that only the stars have been the witness of our love.

Speak of it to no living person, dearest; and take with you this little souvenir of our happy night.” And she presented him with an exquisite and curious little thing—a paper-weight in likeness of a couchant lion, wrought from a jade-stone yellow as that created by a rainbow in honor of Kong-fu-tze. Tenderly the boy kissed the gift and the beautiful hand that gave it. “May the Spirits punish me,” he vowed, “if ever I knowingly give you cause to reproach me, sweetheart!” And they separated with mutual vows.

That morning, on returning to the house of Lord Tchang, Mihg-Y told the first falsehood which had ever passed his lips. He averred that his mother had requested him thenceforward to pass his nights at home, now that the weather had become so pleasant; for, though the way was omewhat long, he was strong and active, and needed both air and healthy exercise. Tchang believed all Ming-Y said, and offered no objection. Accordingly the lad found himself enabled to pass all his evenings at the house of the beautiful Sie.

Each night they devoted to the same pleasures which had made their first acquaintance so charming: they sang and conversed by turns; they played at chess—the learned game invented by Wu-Wang, which is an imitation of war; I hey composed pieces of weighty rhymes upon the flowers, the trees, the clouds, the streams, the birds, the bees.

But in all accomplishments Sit far excelled her young sweetheart. Whenever they played at chess, It was always Ming-Y`s general, Ming-Y`s tsiang, who was surrounded “nd vanquished; when they composed verses, Sie`s poems were ever luperior to his in harmony of word-coloring, in elegance of form, in classic loftiness of thought. And the themes they selected were always the most difficult—those of the poets of the Thang dynasty; the songs ey sang were also the songs of five hundred years before—the songs Youen-tchin, of Thou-mou, of Kao-pien above all, high poet and ruler the province of Sze-tchouen.

Tags: The Story of Ming-Y