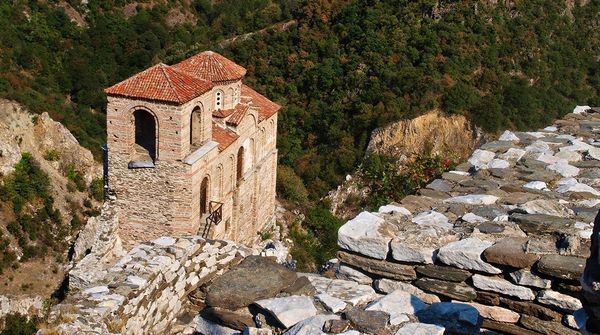 The Bulgarians` first contact with the Balkan Peninsula is dated to the end of the fifth and the beginning of the 6th centuries. They settled gradually in the regions of the former Roman provinces of Moesia, Dacia and Macedonia. The territories had suffered invasions of the Barbarians in the 3rd—5th centuries but the Bulgarians revived them, bringing economic, political and cultural prosperity. The following expressive statement refers to such a prospering country:

It [the land of the Bulgarians] was a very fertile region. It exported honey, butter and sheep across the world. In general, there were all kinds of goods in it, more than in other regions.”

The medieval Bulgarian state in Southeastern Europe occupied the lands to the south of the Balkan Mountains in the direction of Constantinople. The dream of conquering the Byzantine metropolis was alive until the death of Tsar Simeon the Great (893 927). The policy of inhabiting the lands in the south-southwest turned out however to be more productive.

The territories south of the Rhodope Mountains to the Aegean Sea and in the west to Morava River, present day Macedonia and parts of Northern Thessaly, Albania, Kosovo were joined at the time of Kan Presian (836 852). These regions and the whole of Moesia and Thrace formed the historical ethnic cultural space of the Bulgarians in Southeastern Europe in the middle Ages.

The territories of most European states, including Bulgaria, took shape in the early Middle Age Period. Only the lands of modem Italy and Germany are an exception; they became state territories in the second half of the 19th century.

In most cases, the causes of wars were the defense of territories already possessed, rather than the taking control of new ones with a foreign population. Medieval Bulgarians lived under the impression of occupying vast territories, which they usually referred to as “Upper Land” (Moesia with the lower flows of the rivers Timok and Bulgarian Morava, as well as the plains up to the Carpathian Mountains) and “Lower Land” (Thrace, the Aegean coast and present-day Macedonia). In the period 7- 14th centuries, the Bulgarians who were the most numerous people in the Balkan Peninsula, settled permanently in their ethnic lands.